The palest ink is better than the best memory.

Notes from the Field - The Latest News!

This is another year your usual note writer Dr. Larry is not able to join the group in Wyoming. McKenzie Martin has agreed to provide the inside information for the daily notes. Her efforts are appreciated.

Wednesday, 30 May
Packing day!
The trailer is partially filled with equipment and supplies for the expedition—oh, there is some room for some personal items of the participants! Tomorrow at 8:00am the expedition is scheduled to depart!
Thursday, 31 May
The 2018 Season officially gets underway!
The caravan consisting of the usual truck with trailer and two vans pulled away from the campus of Southwestern Adventist University at 9:08am.
At around 10:20 am the caravan suffered its first (hopefully last) flat tire of the season. Luckily the tire on the rear-left of the trailer blew and no one in the vans were harmed. This daunting situation was a quick fix with the brawn and brains of Dr. Wood, Daniel, Wallace, Mikey, and several others who successfully got us back on the road in less than 30 minutes. Interestingly, the tire blew at the same location of the flat tire summer 2017. 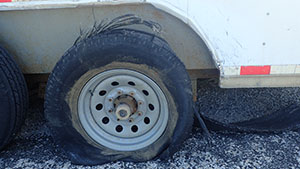 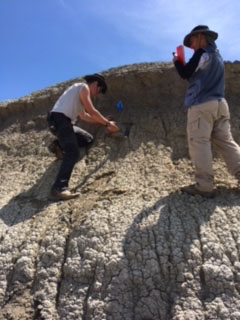 At North quarry, Hazel unearthed a raptor tooth in superb condition! South quarry continued to find lots of large and interesting bones under the excellent leadership of Kathleen. 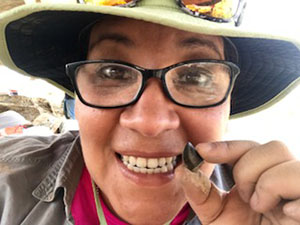 Another battle-star galactica "launched" at "launch" time in honor of Dr. Turner.
Today's dig ended with the anticipation of a thunderstorm. Wispy white clouds quickly grew into a massive storm as the two vans pulled out of the main quarries. A delicious dinner was devoured as the massive thunderstorm blew by.
Amy found a western gopher snake next to Karen's tent! 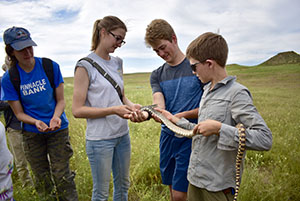 Mikey's back! With him came Rose and a group of her students from Idaho. More diggers = more bones!
After eating a fresh batch of warm chocolate chip cookies and milk, everyone petered off to bed.
Wednesday, 6 June
A series of unfortunate events happened today.
Triceratops quarry was destroyed by the "bovine gang". Stephan called it a "COWspiracy", and that the cows had a "beef" with the quarry crew, and they definitely "weren't chicken". The puns were udderly ridiculous.
An unusual amount people were bitten and stung! A wasp stung Taylor on her rear, Trudy was stung on the hand by a chalcedon checkerspot caterpillar, and one of Rose's students was bitten by a mystery bug. Fortunately none of the stings were severe or life-threatening!
Around noon, one participant felt lightheaded and sick so they were taken back to camp to rest. When they arrived at camp, Karen discovered that her car battery had died.
On a lighter note, Southeast was opened today for Rose and her students, a beautiful rattlesnake was found around the camp vans, and Mikey also joined us today with the GPS!
The day ended sweet with banana pudding.
Thursday, 7 June
We had a big thunderstorm. The weather quit playing with us and finally rained cats and dogs around the middle of the night, into Thursday.
Thursday was a successful day for many! Margaret found the vertebra of a crocodile under a wheel barrel, and Dr. Wood found a large, theropod toe bone! A small racer snake slithered by East quarry, making it the third snake of the season.
Camp Cretaceous welcomed Mark and Sue Silver, daughter Leanne, and Dr. Kirt Wise and his student.
The day ended with fresh cut watermelon.
Friday, 8 June
Instead of a half day of digging, Dr. Wood and Taylor took two vans and Dr. Chadwick's family on a full day of adventures! The day began with a visit to Mammoth Site of Hot Springs, SD, followed by laundry at the laundromat. After the group did their laundry, they traveled to Mount Rushmore and saw the iconic faces of the Black Hills. Although George Washington wasn't cheesin', Micah and I did while sporting our Hanson Research Station, Earth History Research Center polos! 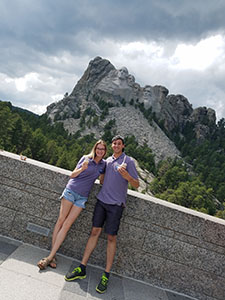 Dr. Snyder and Ivan arrived in camp in the afternoon after traveling all the way from Indonesia!
Following Mount Rushomore was the beautiful Custer State Park. After a rock skipping contest, Dr. Wood led the way through tall pines, massive rock walls, and trickling streams. The Sabbath was welcomed in a secluded corner of the park. Bible verses and thoughts were shared by everyone for vespers. The day ended with pizza at a local Custer pizza joint.
At the end of the first week of excavation, we have reached a total of 370 bones recovered.
Saturday, 9 June
The first Sabbath worship at the end of a full work week was spent beneath the big white camp tent. After many hymns, Dr. Chadwick gave a rejuvenating study of the second book of Peter.
Around mid-afternoon, camp split up into three groups: one going on a tour of the ranch, the second to devils tower, and the third stayed comfortable under the shady camp tent.
Those who toured the ranch saw petrified wood and exposed dinosaur bones, rode the river trolley, and explored the micro-site. Those who stayed at camp chatted among the fold-up chairs or scuba dived and petted dinosaurs in the kitchen using the new virtual reality system set up by Dr. Wood.
Pockets and sandwich bags were full of micro-fossils when the crew returned to camp. As the evening cooled off, an interesting worship talk was given by Dr. Snyder. The second group that went to devils tower arrived to an every-man-for-himself dinner followed by a short night of sleep.
Off to bed for a too-short night then it will be off to the quarries again!
Sunday, 10 June
Today marked the beginning of the second week of Dinosaur Project excavation season. It was foggy and chilly this morning, almost like a morning in Georgia where the air is so wet and thick you can cut it. After a pancake breakfast and worship, the vans filled up and headed to the quarries. The misty morning quickly turned into a sunny and hot afternoon. Some adjustments were made in the quarries as new diggers arrived.

Our water reserve is running very low so only limited water use is allowed. It's time to bring out the baby wipes!