Without words, without writing and without books there would be no history, there could be no concept of humanity.

Notes from the Field - The Latest News!

Thursday, 3 June
This is the day the 2010 expedition begins!!
The plan was to assemble at 6:00am for an immediate departure—the expedition consisting of two vans and a pickup truck pulling a trailer left Keene at 6:52am! Justin piloted the truck, and Drs. Art and Larry drove the two shuttle craft. A total of 14 participants (including the pilots): Tyke, Tetsuya, Michael, Charles, Heston, KC, and Luke and students Caleb, Darren, Jordan, and Matthew all stretched out in the three vehicles.
There was smooth sailing as the expedition headed north through Oklahoma City, Wichita, and Salina to I-80. Shortly after that we began experiencing a strange problem with the truck—it would suddenly lose power. We discovered that if it sat for a while, it would run fine—for a while! We proceeded westward in fits and starts as the miles receded. After stopping to jury rig the lights (Mr. Scott would be proud.) on the trailer we continued . . .
Friday, 4 June
. . . through the night. Fortunately the expedition had sufficient relief drivers! The three vehicles arrived at Camp Cretaceous about 10:30am. Marjorie, Stephan, Dawnella, and students Vanessa and Monica were already there to greet the convoy. The first order of business was to thank God for His hand over us as we traveled. The vehicles were unloaded, and the participants worked very intensely to set up their private bedrooms. The truck and one van with Dr. Art, Justin, Tyke, and Heston left for Rapid City for the purposes of getting a reliable truck, shopping, and picking up a student.
Those that stayed in camp did more organizing, caught up on some much deprived sleep, and took a quick visit to the quarry site. The first impression as we approached the area, was the Hoodoo Hut was all katerwumpus. It had collapsed, the frame splintered, and the roof torn. As Bones would say, "Its dead, Jim." We shall need to deal with that situation before proceeding with the excavation work in North Quarry. 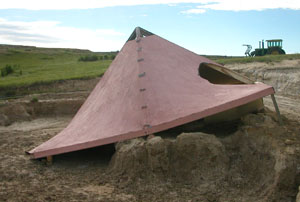